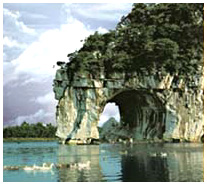 Elephant Trunk Hill, also known as Elephant Hill is located at the confluence of Li River and Peach Blossom River in the southwest of Guilin city. It looks like a huge elephant stretching its trunk drinking water hence the name. Elephant Trunk Hill has been the symbol of the karst landscape in the area.

Water Moon Cave
Between the elephant trunk and its body space a round cave which resembles a full moon drifting on the water, thus the name. When in a full moon night, the water waves and the moon glitters form a fantastic scene which has been highly honored by poets, painters over history. In and out of the cave are many carvings and inscriptions, the most well known of which is a poem by Lu You, one of the four great poets of the Southern Song dynasty (1127-1279).

Climbing through the snaking stone path highway up to the hill, visitor will see another cave going through the hill, the Elephant Eye Cave. With a height of around 2 meters, the cave spans 5 to 10 meters in width, about 52 meters in length. itâ€™s so called for the cave located right at the site for eyes. A look through the cave affords a good view of the surroundings.

Puxian Pagoda
On top of the hill stands the Puxian Pagoda. Built in the Ming Dynasty, the cylinder shaped pagoda looks like the handle of a sword.