The Great Wall is one of the cultural heritages of China, which is one of the most magnificent man-made project in the world, it lies across the northern part of China like a great dragon, winding its way through the vast territory of China streching over 6000km. It is also the only human work that can be seen from the moon. 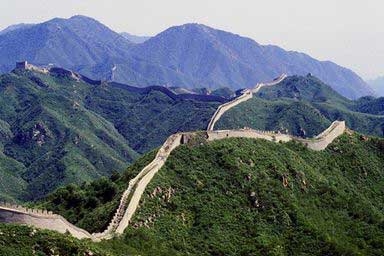 It was originally built as the fortification for the ancient empires. Up to now, large parts of the wall are in ruins or have disappeared, however, good view points can be reached near Beijing, like Badaling Section, Simatai, Jinshanling and Gubeikou etc.

The northern part of the Great Wall in Beijing becomes the tourist spot today which was reconstructed. No one can tell when the ancient Great Wall started, It is said that the oldest ones are fortification walls of China erected between the kingdoms of the Warring States period from the 5th to the 3rd century BC: the walls of Qi  (Shandong Province), Chu (Hubei Province), Qin(Shanxi Province), Yan ( Hebei Province), Zhao (Shanxi Province), and Wei( Henan Province).

Badaling Great Wall  is located more than 70 kilometers northwest from the center of Beijing City, occupies a commanding and strategic position. Badaling is the best-preserved section of the Great Wall. It was built in the 18th year of the Ming Hong Zhi reign (1505). The wall was built with high stone slabs outside, it is 7.8 meters high on average, some even reaches 8.4meters. The base of the wall was built with more than 2000 large rectangular slabs of granite stones. It is about 6.5 meters wide and 5.7 meters wide on average on the ramparts. The wall is wide enough for five horses to gallop abreast and ten people to advance shoulder by shoulder. The outside of the wall is called rampart wall. The rampart wall was built with bricks as 1.7 meters high. For the purpose of defense, there are holes on the tip of the wall called watch-hole, and peepholes under the wall called embrasures. Inside the wall, there are low walls with one meter high called parapets, which can be used as railings. There is a scroll door not far from the inside wall, with is a stone ladder for climbing up and down. The wall is narrow on the top and broad on the bottom forming an adder-shape structure. This made the wall stands firmly on the rise and fall ridges. The wall was built with 10-14 rectangular slabs of stones surround its outside, filled with soilsand stones in the middle, and paved with square bricks on the top between the bricks were stuck with lime stones. This makes the wall tidy, beautiful, and firm. There are gutters with gargoyles to drain rain-water off the parapet wall. 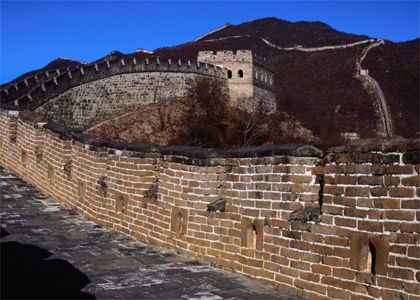 The landscape of Badaling Great Wall changes every season, with numerous scenery to catch your attention. A sunlit and enchanting scene of spring,  the valley covers with greens. When the rain comes, the vista will look vast and hazy. The sky in autumn is high with unsoiled stratosphere, while the maple forest is dyed in golden colour. White snow covers the whole scene in winter.

Transportation: If you take a taxi to get to the Great Wall from Beijing city centre, it generally costs 400RMB(about 50USD), the round way will cost 800RMB(about 100USD).

Mutianyu Great Wall is located in Huairou County, Beijing. Northern Qi (550-577) started to construct a wall here. During the Ming Hong Wu reign (1368-1398), General Xu Da built the Great Wall on its foundation. The Mutianyu Pass was erected in 1404 (the 2nd year of the Ming Yong Le reign). Construction continued when General Qi Jiguang was transferrel to Jizhou to command the garrison area in 1568 (the 2nd year of the Long Qing reign).

The fortifications and the Great Wall here are characterized by many watchtowers on overlapping mountain ranges. The wall was built with slabs of stones, is crenellated on both sides with bricks. Horsetrapping snares outside the wall offer better protection and ward off attacks. With Juyongguan in the west and Gubeikou in the east. 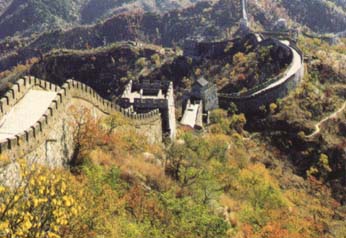 Mutianyu serves as the northern barrier defending the capital and the imperial tombs. With vegetation, green pines and cypresses covering 90 percent of the area, the sceneries here are beautiful all the year round.

Simatai Great Wall is located at GubeikouTown in the northeast of Miyun County, Beijing, 120 kilometers from the city center. Its construction started in the early Hongwu years (1368-1398) of the Ming Dynasty. Like most sections of the Ming Dynasty Great Wall often visited today, this section was also built under the supervision of General Qi Jiguang. 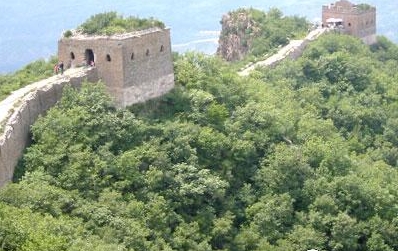 The Simatai Great Wall is 5.4 km long with 35 watchtowers. As the east section of the Gubeikou defense line, this magnificent section features great strategic significance. Built hundreds of years ago, the Simatai Great Wall still retains all its original appearance. It not only incorporates a variety of styles of other parts of the 10, 000-li-long wall, but also displays some unique characteristics. This section of the Great Wall is often described with the following five words: perilous, dense, diverse, ingenuous, and peculiar.

With its fantastic scenery and precipitous topography, the Simatai Great Wall is a remarkable place for sightseeing, hiking and exploration.