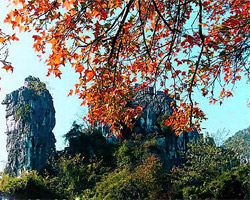 Seven Star Park is on the eastern side of the Li-River in the Guilin city. The park takes its name from its seven peaks which are resemble the pattern of the Big Dipper constellation. Attractions in the park include, Seven Star Cave, Dragon Hiding Cave, Flowers Bridge, the Zoo, Mosque, Potted Trees, Guihai Forest of Steles and much more. Covering an area of 134, 70 hectares, it is the largest park, composed of some of the finest sights in the city.

Camel Hill
It is a wow sight in the park. In Guilin, you will find all the limestone hills look like somebody or something. This hill looks incredibly like a huge camel standing in vast grassland. When in a bright morning or afternoon, the sun sets on the hill, reflecting a brightly glow. On foot of the hill stretches a patch of grassland which offers a pleasant stroll. The place is very popular with the locals; many can be seen leisurely walking around in early mooning or late afternoon. Nearby you will find a zoo, which once hosted a Giant Panda named Meimei which died last year. Now the zoo only houses a few animals and we advice foreigner visitors to avoid it for the conditions of Chinese zoo are a little bit brutal for animal lovers.

Seven Star Cave
Nestling at the belly of the Putuo Hill, the cave is well-known for the dazzling stalagmites and stalactites within it. The cave stretches around 1,100 meters, with 50 meters at the widest point and 20 meters at the highest point. The cave has been a tourist attraction for hundreds of years. As early as song dynasty, some explorers adventured the cave and left their marks inside. With various oddly shaped karst formations, the cave is indeed overwhelming and well values your time and money.

Guihai Stele Forest is set to the south of the Crescent Hill where about 218 stone carvings and inscriptions are well preserved. Most of these carving works were from Tang and Song Dynasties which have been of great importance in Chinese calligraphy culture. If you wonâ€™t have time to visit the Famous Forest of Stele in Xian, this one, however, will provide a ideal alternative.