Fengdu - The Ghost City Fengdu, which also called the"City of Ghosts" on the Ming Hill is far 170 km from the east of Chongqing, on the north bank of the river with a history of 1,900 years. Why it has been regarded as the "City of Ghosts"? 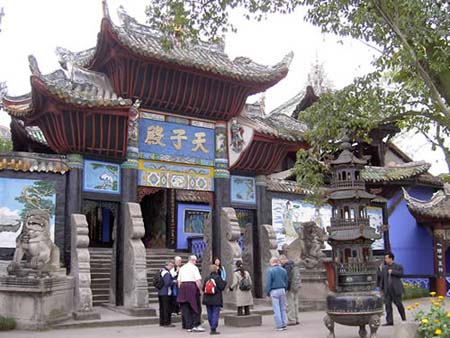 Situated on the northern bank of the river between Zhongxian and Fuling, the city was depicted as the 'City of Ghosts' in two ancient, classic Chinese works - "Monkey King" and "Strange Stories from a Chinese Studio". The origin of the town's extraordinary reputation can be traced back to the Han Dynasty (206 B.C. - 220 A.D.) when two officials, Yin and Wang, became Taoist recluses here and eventually Immortals. Later in the Tang Dynasty, their names were combined to mean "King of the Underworld". 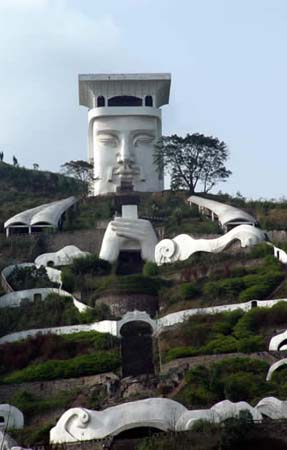 Thereafter, Mt. Mingshan gained its reputation as the 'City of Ghosts' where the king lived.

Today, the town throngs with many tourists who come to visit temples and shrines dedicated to the gods of the underworld. Landmarks here bear horrific names - Last Glance at Home Tower, Nothing-to-be-done Bridge, and Ghost Torturing Pass - the three trials for ghosts who wanted to enter the nether world. 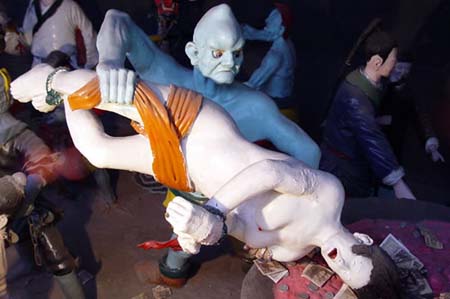 It got its reputation as the "Ghost City" in the Eastern Han Dynasty. Two officials from the imperial court: Wang Fangping and Yin Changsheng, got bored with the political life in the court and came to Mt. Minshan outside Fengdu City to practice Taoist teachings. Both of them later became immortals by carrying out self-cultivation. This story widely spread and Mt. Minshan became famous. When combined together, their surnames Yin and Wang, sound very much like "King of Hell" in Chinese. Hence the people began to call Fengdu the "Ghost City".It was the legendary capital of The Ghost King sculptured statue is 138 meters high and 217 meters wide. The tongue only is 81 meters long and mouth 70 meters wide. The pictures are carved in to the mountain for a depth of 26 meters. Visitors can climb the body of the king to the top of the mountain. Guinness World Records has listed it as the biggest sculpture carved on a rock.Ghost State by Daoists.

To Chinese, the social structure in the hell is exactly like that in this world. In hell, a sprit would go through a whole and complete bureaucracy to get the final sentence. The pure spirits would be rewarded and the sinful ones would be severely tortures. Different tortures would be given to different sins. The Temple built on Mt. Minshan display instruments of torture and wide demon images, which vividly depict the Chinese people's imagination of Hell. Landmarks on the hill bear horrible name - Ghost Torturing Pass, Last-Glance at Home Tower, nothing-to-be-done Bridge and the River of Blood.

Every Chinese Lunar March 3 to 15, merchants and businessmen gathered Fengdu city. There were various folk culture activities. The ghost face is one of