Wu Gorge is the most beautiful section of the Yangtze River, flanked by high peaks that are often capped by fog or clouds. The steep slopes of the gorge are green with trees and bushes. The gorge was long known to be as dangerous as it is beautiful. It was a dangerous place for boat navigators, who faced dangers including whirlpools, quicksand, and currents that varied from hour to hour. As the river cuts its way through the Wushan mountains, its roaring currents change their directions constantly.

Wu Gorge is 45 kilometers (28 miles) long, extending from the mouth of the Daning River in the west to the north-bank town of Guangukou, in Badong County, in the east. The small trading town of Peishi marks the provincial border, where the river crosses from Sichuan Province into Hubei Province.

The gorge is divided into two main sections, the Golden Helmet and Silver Armour Gorge and the aptly-named Iron Coffin Gorge. Wushan, a town that is well known for its extraordinarily beautiful setting, looks both down the Wu Gorge and up the Daning River into the Three Little Gorges. The Three Little Gorges are flanked by continuous rows of strange peaks, many of them also rising into the clouds.

Looking down the Yangtze River, Wushan sees 12 high peaks, which are described by legend as being 12 fairy spirits. The best known is Shennu Feng (Goddess) Peak, which is topped by a large rock that resembles a sculpture of a girl looking down upon the boats in the river. The rock is about ten meters high and six meters in girth, and stands atop a 1,020 meter on the north side of the Yangtze. It is said that this rock resembling the figure of a beautiful maiden is actually the embodiment of Yao Ji, the youngest daughter of the Heavenly Mother. Yao Ji became a protector of the people, guiding sailing boats through the gorge and easing the Yangtze's infamous floods.

Later, Wushan became Yao Ji's favorite place. She built a small palace there, which she shared with her 11 fairy handmaidens. Eventually, these 12 maidens became the 12 peaks of the Wu Gorge. At dawn and dusk, Goddess Peak is often immersed in glowing clouds, giving it a heavenly appearance. For the other 11 enchanting peaks, visit Wu Gorge (Witches Gorge).

Of the 12 peaks, six are on the north side of the Yangtze and six are along the south side. Along the north side, there are Climbing Dragon Peak (Denglong Feng), Sage Spring Peak (Shenquan Feng), Facing Clouds Peak (Chaoyun Feng), Goddess Peak (Shennu Feng), Fir Tree Cone Peak (Songluan Feng), and Congregated Immortals Peak (Jixian Feng). 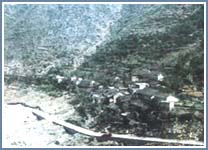 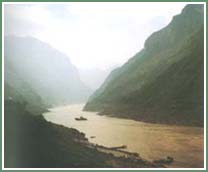 Golden Helmet and Silver Armour Gorge (Jinkui Yinjia Xia) is located ten kilometers (six miles) downstream from Wushan. It received its name from a helmet-shaped cliff that resembles in both shape and color the golden helmet worn by soldiers. Nearby and just above the river, another precipice features off-white layered slate that shines in the sun just like an ancient warrior's silver armour.

In addition to the mountains, one finds smaller features, each of which has legends told about it. These include the Hengshi Brook, the Rat's Cave, the Mountain-Penetrating Arrow, the Arrow-Penetrated Hole, and the Dragon Back Rock.

Just beyond Golden Helmet and Silver Armour Gorge, the gorge curves to the left. The river looks up at a mountain in front of it. This is Congregated Immortals Peak. There is an inscription that one can barely make out on the face of this peak. This is the Kongming Bei, which legend attributes to the great third-century politician and military Strategist Zhuge Liang. The town of Guandukou marks the end of Wu Gorge. Prior to the 1950s, this was the location of the Flint Rapid (Huoyan Shi), which was very violent at high water. There were limestone rocks jutting into the river like huge stone gates beckoning helpless craft. The Yangtze that you see in the gorge today is not the Yangtze of earlier Chinese history. During the 1950s, Flint Rapid and all of the other dangerous rocks in the shipping channel were blown up to make the river safer for shipping.