Comprising many dangerous rapids and currents, Xiling Gorge starts at Badong County and zigzags for 76 kilometers (47 miles) down to the Nanjin Pass in Yichang. It is the longest part of the Three Gorges system with dangerous rapids like Xietan, Qintan and Kongling, collectively known as the Three Rapids of Xiling.

The first rapid in Xiling Gorge - New Rapid (Xin Tan) - rushes over submerged rocks, the oily surface of the water churned by whirlpools. The swift current carries boats down river through Xin Tan at the rate of seven meters (30 feet) per second. It is a thrilling ride.

The four-kilometer long Military Books and Precious Sword Gorge (Bingshu Baojian Xia) is the first spot at the western entrance of Xiling Xia. The name of the gorge refers to a stratified layer of rock resembling a stack of books, and a perpendicular rock shaft below it at a small cave on the north bank.

Rice Granary Gorge (Micang Xia)stands at the mouth of a ravine on the south side. Blown by river winds, fine sand piles up on the rock, and slowly leak through a hole underneath, hence  the name Micang. 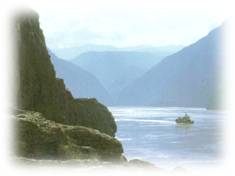 Further on, Qintan Rapid, stretching between "Military Books and Precious Sword Gorge" and "Ox Liver and Horse Lungs Gorge", includes First Rapid, Second Rapid and Third Rapid, and runs one-and-a-half kilometers from west to east. It teems with reefs and heaves with sweeping, boisterous rapids. Sailors call it the "Iron Threshold" to the river. Boats and skiffs shoot downstream like flying arrows and flounder upstream as if scaling a ladder, zigzagging their way both up and down. 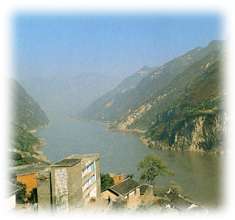 The channel winds blow east and then south, towards Ox Liver and Horse Lungs Gorge, which is named after the yellow stalactite formations on the north side. One of the 'Horse's Lungs' went missing, blown up by British gunboats during the reign of Emperor Guangxu (1875-1908).

Kongling Rapid lies in the Miaohe section. The local people have always said: "Qintan and Xietan are not real rapids compared with Kongling Rapid - the worst of the Yangtze rapids." 24 reefs, named Great Pearl, First Pearl, Second Pearl, Third Pearl, and so on, are crammed into the rapids, overlapping each other. The Great Rapid sprawls in the middle of the river, dividing the water into two channels; the south channel is full of jagged reefs and fickle eddies, and the north channel is narrow, twisted and forbidding with submerged rocks. There is also a treacherous reef called "Coming-at-Me", which used to fill people with fear. This is a rapid where passing boats have to thread their way through the reefs, dodging from side to side all the time. 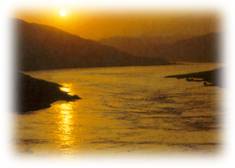 Down river about five kilometers past Qintan Rapid is Ox Liver and Horse Lungs Gorge. Many other scenic spots encompassed by Xiling Gorge are "Lantern Shadow Gorge", "Huangling Temple", "Three Travelers' Cave", "Horse Bell Rock", Mt. Qingshi (Black Lion) in Shipai Town, and Three Swords Peak at Nantuo. There are also many spectacular waterfalls. During the rainy season, one of the largest, Jiuwanxi Waterfall, roars with its gushing water.

At the foot of Heavenly Pillar Peak, there is a stalactite cave called Huangsang Cave. It is spanned by a natural stone bridge, known as the Fairy Bridge that is covered with creeping plant growth. On one end of the bridge stands a statue of a fairy. It is a truly wonderful sight to look down at all the boats shuttling to and fro.