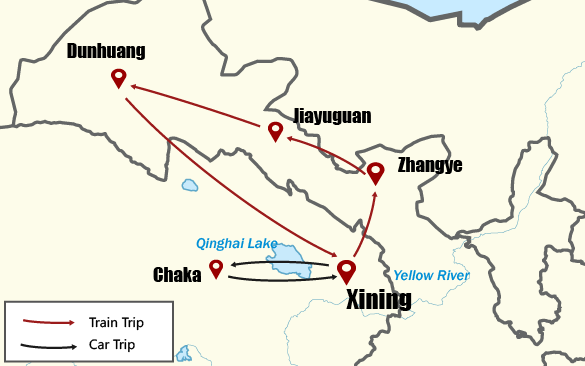 Airplane arrival has a history of more than 2000 years, known as the "Summer Capital of China" - the ancient plateau city of Xining, on the way to visit the city of Xining, Xining City to stay in hotels.

After breakfast, take a train to Zhangye (reference number: D2701, 09:16-11:05). After the arrival, the tour guide will pick up the group. After lunch, proceed to [Qidan Danxia Geopark] (about 3 hours), Zhangye's Danxia landform It is one of the regions with the best development and the most abundant landforms in Danxia, China. Especially the window-type and palace-style Danxia landforms are the finest of Danxia landforms. The colors of the colorful hills are colorful and the area is the largest. The Zhangye Danxia landforms mainly consist of two groups, the north and the south, distributed in a strip shape. The middle part of the Zhangye Oasis Basin is echoed by the distant phase. After the end, I went to the important traffic fortress of the ancient "Silk Road" in China, and Jiayuguan, one of the three great wonders of the Great Wall of China, stayed at the hotel. 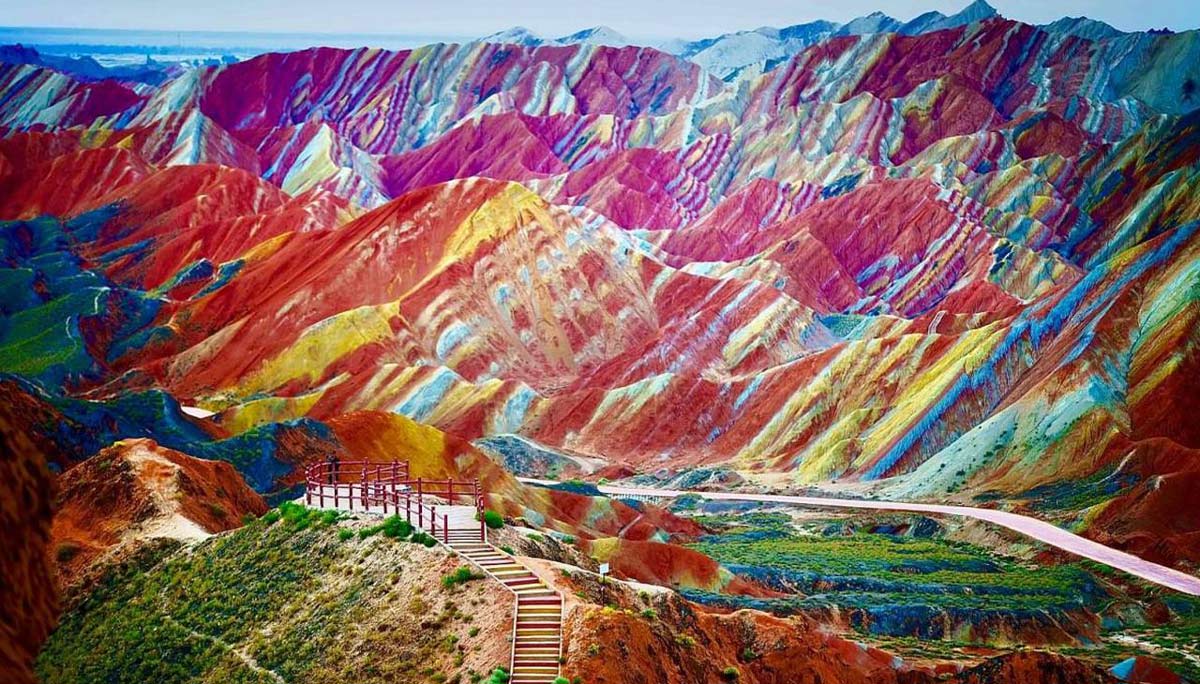 After breakfast, visit the [Jiayuguan City Tower], which is located in the middle of the narrowest valley in the Jiayuguan city. It is the highest-ranking Jiayu Mountain. It is the western end of the Great Wall of the Ming Dynasty. It has been the first pass of Hexi since ancient times. Guancheng was built in the 5th year of Ming Hongwu (1372). Because of the dangerous terrain, the building is majestic and has the title of “the world is the Xiongguan” and the border is locked. The city tower consists of the inner city, the outer city, the Luocheng, the Yucheng, the Chenghuang and the north and the south. The two wings are composed of the Great Wall, with a total length of about 60 kilometers. The Great Wall City, the Pier and the Fort City are dotted with the three inner defense lines of the inner city, the outer city and the city, which form an overlapping and guarding trend, forming a five-mile, one-mile, one pier, three Shiliyibao, the defense system of Bailiyicheng, and the scenery along the way to enjoy the unique desert Gobi scenery in the northwest. Guazhou has been famous in China and abroad for its rich production of Melon. There are 4 series and more than 30 series. Variety of crispy juice, sweet and delicious, refreshing and pleasant, is the best product for summer and thirst. After arriving at the hotel, free to move, you can go to Dunhuang Shazhou Night Market to taste local specialties. 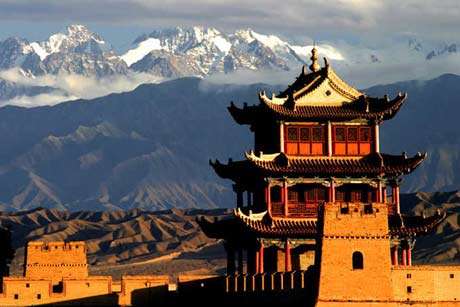 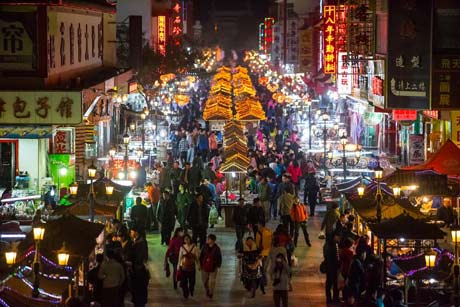 After breakfast, visit Dunhuang [Mogao Grottoes] (the specific visit time is based on the actual booking time of the tickets. The tickets of the Mogao Grottoes in Dunhuang need to be booked one month in advance, and the guest list should be provided 35 days in advance). Mogao Grottoes is an artistic palace which combines ancient architecture, sculpture and murals, and is famous for its rich and colorful murals in the world. 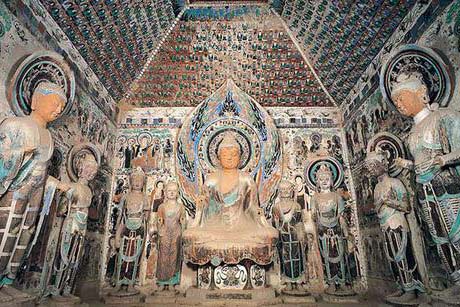 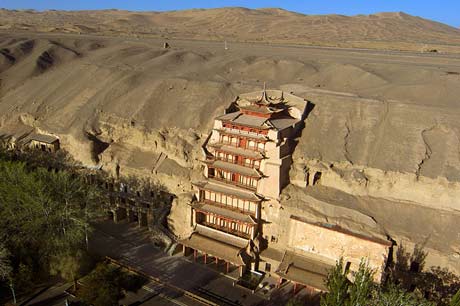 Dunhuang murals are rich in capacity and content, which can not be compared with any religious grottoes, temples or palaces in the world today. Looking around the cave and the top of the cave, Buddha statues, flying sky, Kabuki music, fairies and so on are painted everywhere. There are Buddhist Sutra story paintings, Sutra alterations paintings and Buddhist historic paintings, as well as God and monster paintings and portraits of providers, as well as a variety of exquisite decorative patterns. The sculptures of the Mogao Grottoes have long enjoyed great fame. There are sitting statues as high as 33 meters, and small Bodhisattvas as high as a dozen centimeters. Most of the caves have statues, which can be called a large sculpture museum. 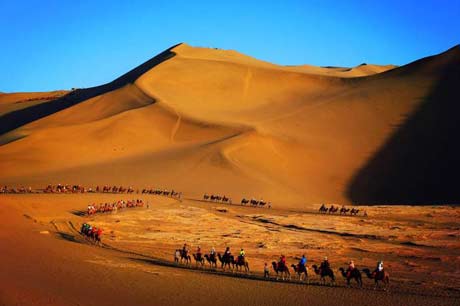 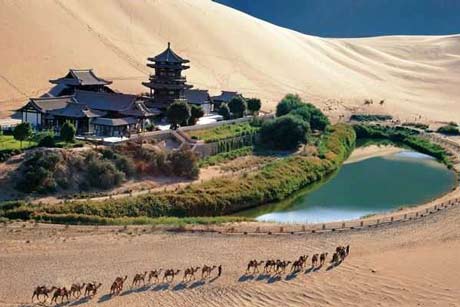 Day 5:   Dunhuang - Xining You will be chauffered to Dunhuang Station/Liuyuan Station,then take a highspeed train( 900km, around 6 Hours) return to Xining.

After breakfast, take a train to Dunhuang Station/Liuyuan Railway Station, return to Xining by bullet train and arrive at Xining to check in at the hotel (Train tickets need to be booked one month in advance, and guest lists need to be provided 35 days in advance). 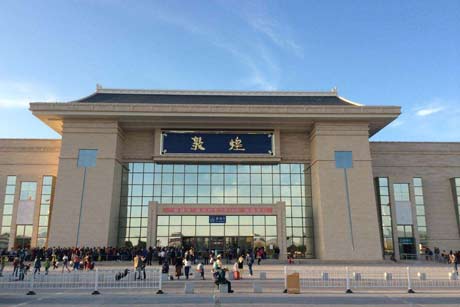 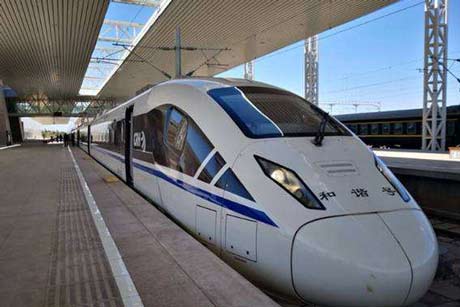 Bullet Train in the Dunhuang station

After breakfast, I went to the only green edible salt production base in China (Chaka Salt Lake) for about 2 hours. Chaka Salt Lake is a magical and beautiful place. It is 15.8 kilometers long, 9 kilometers wide from north to south, and has an area of 105 square kilometers. It is the oldest Salt Lake in the Qaidam Basin and the national level of Qinghai Province. One of the tourist attractions. The lakes and mountains have beautiful scenery. Sometimes the lake surface ripples, sometimes reckless and white, beautiful, magnificent in one, in the Qinghai-Tibet Plateau, many salt lake families, meteorological thousands, unique. Salt lake waters are wide and sparkling with silver. The sky is long and white clouds, the distant Cangshan is magnificent, the blue sky, white clouds and snow mountains are reflected in the lake, like poems and pictures. Around the grass, sheep like pearls. Walking on the lake is like entering the world of salt. After that, I will go to Qinghai Lake or Gonghe County for accommodation. 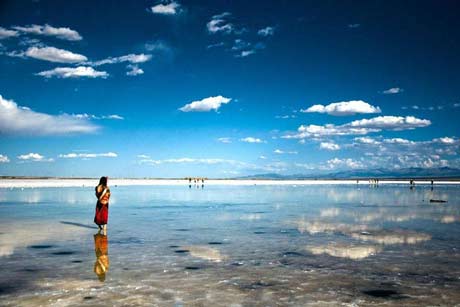 After breakfast, I went to Erlangjian, Qinghai Lake. It's a pity that I didn't visit Qinghai Lake, China's largest saltwater lake. Qinghai Lake is surrounded by four lofty mountains, looking around like four high natural barriers, which tightly surround Qinghai Lake. From the foot of the mountain to the lake, there is a vast, flat and boundless grassland. The vast and vast Qinghai Lake, like a huge jadeite pan embedded in the mountains and grasslands, forms a magnificent scenery and beautiful scenery of mountains, lakes and grasslands. The scenery of Qinghai Lake is quite different in different seasons. In summer and autumn, Qinghai Lake has beautiful mountains and rivers. The vast undulating grassland is like a thick green blanket. Countless cattle, sheep and horses are like colorful pearls scattered all over the grassland. Large areas of neat and picturesque farmland along the lake are rolling with wheat waves, cauliflower is pan-golden, and Qinghai Lake, which is full of blue water and sky, seems to be the same. The glass agar is rippling gently. When the cold winter comes, Qinghai Lake is ice-sealed and jade-lined and silver-coated, just like a huge mirror, shining in the sunshine and shining all day long. It can walk on the frozen surface of Qinghai Lake. After that, I went to the Buddhist holy place [Tar Temple], and took a sightseeing bus to visit the Tar Temple scenic spot. Tar Temple is one of the six most influential monasteries in Tibetan Buddhism and one of the most believers in the Gelug Sect (Yellow Sect). It is also the birthplace of the founder of the Gelug Sect, the grandfather of the Dalai Lama and the Panchen Master, Master Zongkaba. The temple has an important position in the history of Chinese architecture. The temple covers an area of more than 40 hectares, with 15 palaces and more than 9300 monasteries. It forms a complete Buddhist architectural complex combining Tibetan and Han architectural arts. The main architectural complex of the Tar Temple includes eight treasures Ruyi Pagoda, Great Jinwa Hall, Little Jinwa Hall, Great Jin Hall, Manjusri Bodhisattva Hall, Mizong College, Butter Flower Hall, etc. And butter flower, known as the "art of three unique". Return to Xining for hotel stay.

After breakfast, we went to visit Dongguan Mosque, which is one of the great mosques in Northwest China. The temple is built in a magnificent way, sitting in the West and east. It has the architectural characteristics of Chinese classical architecture and national style. It has beams, colorful eaves and brilliant gold. The hall is spacious, tall and bright. It can accommodate more than 3000 Muslims to worship at the same time. Everywhere in the temple and the whole temple, it is simple and elegant, solemn and solemn, full of strong Islamic characteristics. Afterwards, I went to Xining Airport to send the plane off. I ended my journey happily and returned to my warm home.