Visit the exquisite Baisha Mural to learn about the culture and history of ancient Naxi people. Visit Lijiang Ancient Town to explore its ancient grandeur and modern dynamics. Explore the sensational beauty of Jade Dragon Snow Mountain and the immense Spruce Meadow.Take a boat cruise to explore the gorgeous Lugu Lake and Liwubi Island. Visit a Mosuo family to learn about its unique culture and join in the campfire party. Visit the fairyland-like Lige Peninsula which lies in Lugu Lake.Visit Zhamei Monastery to explore its ancient grandeur and learn about Tibetan Buddhism.

Day 1:  Arrival in Lijiang (L+D)Fly to Lijiang to start your adventure! On your first day of the journey, you will visit the exquisite Baisha Mural to learn about the culture and history of ancient Naxi people. You will later visit Lijiang Ancient Town to explore its ancient grandeur and modern dynamics.

Take a morning flight to Lijiang, where you’ll be picked up by the local guide at the airport and chauffeured to the hotel in the city. After having delicious local delicacies for lunch, you’ll be delivered to visit the exquisite Baisha Mural at Baisha Village.

Baisha Village is named after the signature white sands abound in the area and is located 16 km to the northwest of Lijiang Ancient Town. It’s the earliest settlement of the Naxi people and houses myriad cultural relics and ancient buildings. One of the biggest tourist draws in the village is the exquisite Baisha Mural, which consists of a series of paintings created 600 years ago, representing the first-class craftsmanship at that time and reflecting the spiritual pursuit and mundane life of Naxi people in ancient times. Not only does it stand out as a rare treasure of art, but it also serves as an important source of information for research on national religions, arts and history. 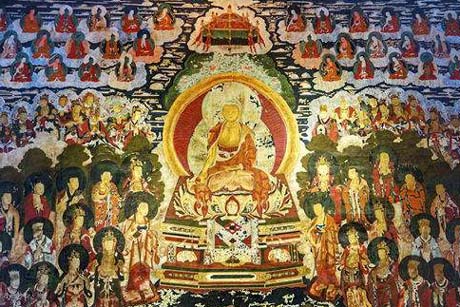 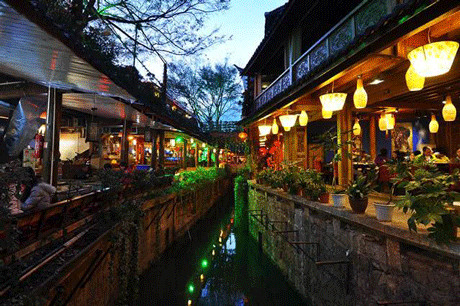 The highlight of today’s trip is a journey to the magnificent Jade Dragon Snow Mountian, which lies to the northwest of Lijiang and is only an-hour road trip away. The 13 summits are always topped with snow. They look like a row of columns touching the sky. The mountain earns its name as it looks like a giant dragon lying across the peaks and preparing to leap into Jinsha River.

You’ll board the world’s highest passenger cable at the foot of the mountain and ascend to an elevation of 3240 meters to visit the Spruce Meadow. Stretching an area of 1000 square meters, the meadow is both peaceful and sensationally beautiful. The sweeping grassland extends to the distant horizon and is carpeted with wild flowers and lush vegetations. The surrounding dense forest forms a natural fence for the pristine pasture with the rolling mountains looming on the horizon. Yet this heaven for a placid grazing shifts its appearance in different seasons. The meadow takes on a silver color in winter when the whole area is blanketed with snow. 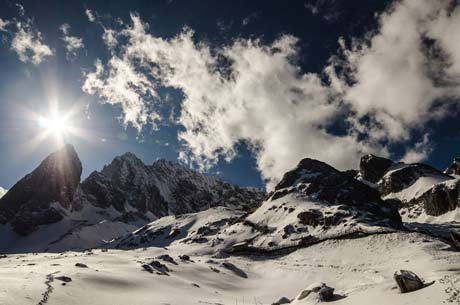 Day 3:  Sightseeing Lugu Lake (B+L+D)Take a boat cruise to explore the gorgeous Lugu Lake and Liwubi Island. Visit a Mosuo family to learn about its unique culture and join in the campfire party.

After breakfast, you’ll embark on a road trip for around 3.5 hours to head to the Lugu Lake scenic area. Upon arrival, you’ll take a boat cruise to explore its sensational beauty—its hypnotically blue water shimmering in the sunlight. The middle of the lake forms the border between the Ninglang County of Yunnan Province and the Yanyuan County of Sichuan Province. It is an alpine lake at an elevation of 2,685 meters and is the highest lake in Yunnan Province. The lake is shaped like a horseshoe and is adorned with a range of islands, peninsulas, bays and beaches.

One of its most gorgeous islands is Liwubi Island, which is in the middle of the lake and is only half-an-hour boat trip away from the lakeshore. The whole island is lavished adorned with blooming azaleas and sprawling cherry trees. Climbing uphill along the meandering trails to the summit of the island, you’ll see the splendid Liwubi Lamasery painted in white and decorated with overhanging eaves, it holds the remains of the late Mosuo Chieftain Ayunshan, whose excellent administrative and diplomatic capability had earned him admiration and high recognition among Mosuo people.

The lakeshores are inhabited by many minority ethnic groups, among which the Mosuo people (a sub clan of the Naxi people) makes up the largest proportion of population. They have an ancient family structure considered as ‘a live fossil for researching the marital development of human beings’. You’ll learn more about their life and unique culture by visiting the traditional dwelling of a Mosuo family, who’ll greet visitors with warm hospitality. You’ll also join the Musuo people at night to light up the campfire and dance around the roaring flames—a heritage that has been transformed from a traditional courtship ritual to a welcome ceremony to the visitors. 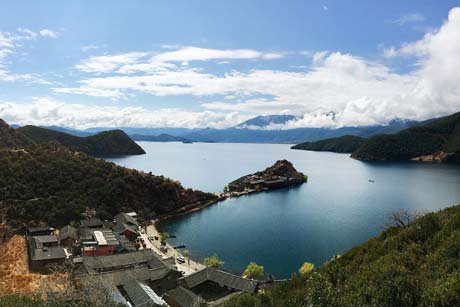 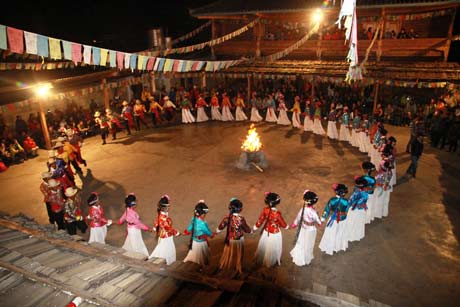 You’ll get up early to catch the magnificent sunrise from the horizon of the lakeshore. Afterwards, you’ll pay a visit to the north part of Lugu Lake to explore the charming Lige Peninsula. It’s a small patch of land being almost entirely embraced by water and is solely connected to the terra firma on its north edge. The best time to visit it is before the sun makes its full presence in the morning, the peninsula appears as an otherworldly fairyland when seen through the swirling mist.

Next up, you’ll be chauffeured to visit Zhamei Monastery, which is situated at the foot of Guer Mountain. As the largest Tibetan Buddhism temple in the habitation area of Musuo people, the whole scope of the complex covers an immense 24000 square kilometers. It originally was a Gelug Sect (white sect) temple, and was later transformed into a Gelug Sect (yellow sect) temple during the Qing Dynasty. Different from the lama temples reformed by the Mosuo ethnic group near the ancient city of Lijiang, this monastery is a traditional Tibetan Buddhism temple. However, it also enshrines and worships the Gemu goddess, which symbolizes features of the Mosuo.

After that, you’ll be transferred back to Lijiang and chauffeured to the airport for your departure flight. 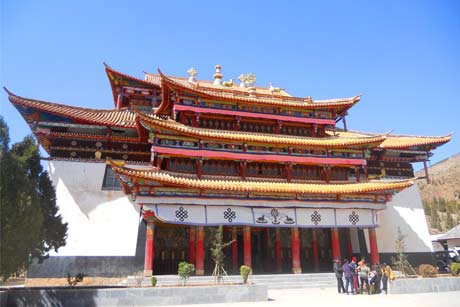 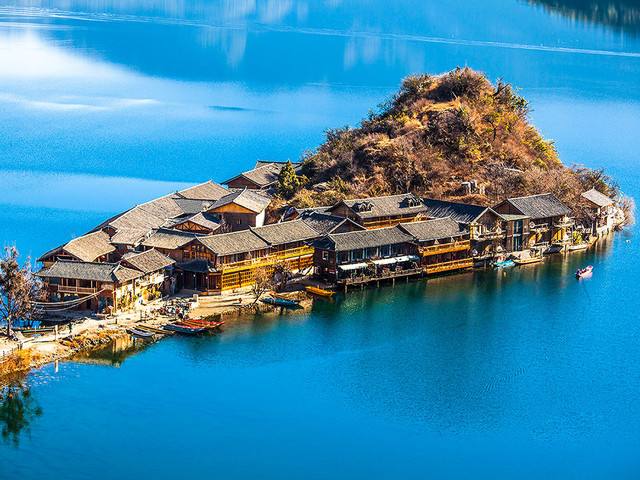 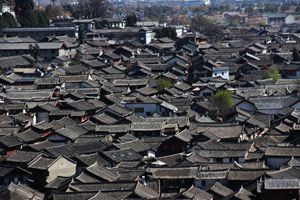 This 4-day tour offers you a great chance to go deeper into this ancient City. Day 1 Lijiang, Ancient Town & Lion Hill Upon your arrival in Lijang, your tour guide will meet you and escort you to your hotel. After a short rest, you will visit the Lijiang Ancient Town and the Lion Hill located inside the A  more..

Enquiry :    Your questions about our tour package?:,Lijiang tour,as recommended,Manage a full plan Flight from Dubai to the destination forth and back ,in 4 or 5 start hotel

Reply :      Have you booked flight to Lijiang ? if yes, please let us know your flight number and time.   May I know how old are your child ?    await for your reply

Enquiry :    Your questions about our tour package?:,we arrive in Lijiang on.12th May 5.35pm flight, so maybe just transfer to the hotel, then a day tour of the old city on the 13th and the trip to the Jade Dragon mountain on the 14th. Then transfer to the airport on the 15th for a flight at 8.40am,What would be the cost for this t

Reply :    According to your request, we can arrange the following Private Tour Packages for you, please have a look.May 12: ArrivalArrive in Lijiang in the afternoon, be met at the airport and transferred to the hotel, free at leisure.May 13: (Breakfast/Lunch)Today you wi

Enquiry :    Your questions about our tour package?:,Hotel name ? What is the tour fare without hotel package?